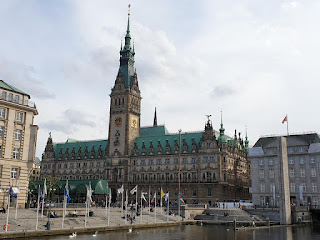 I felt quite a bit better than I did the day before and ?I did get some good sleep before getting up for breakfast before I am swamped by the crowds that would be thinking the same thing. It rained all night and I wasn’t sure what the weather would have in store for me apart from the fact I would be wearing my jumper as it did look a little bit chilly out there. I was happy to be in Hamburg as I wanted to get out there and see the Maritime museum.

Once I was fed and coffeed, I went outside and using my map I headed in the direction of the museum wondering if I would be led astray and in the wrong direction. The direction seemed pretty fine and I found where I had to go. The area where I was walking apparently floods in the storm season so you are warned to evacuate.. Nearby there is even a bridge that has a camera that scans your face and with enough people it will gauge the happiness in the area with a neon sign. I was walking as I wanted to see what the area was like and I kept thinking the area was like Venice being on the water. The buildings are all brick and look very different to what I have seen before. I knew I had heaps of time before the museum opened and I thought I could visit the town hall. I started in that direction and seen some church that caught my attention as it had an interesting spire. I looked at it and thought it was best I get back on the trail and look at the church later on.

The museum I wanted to visit has around 8 floors and I would likely be there for most of the day looking at the displays. I had around 15 minutes before opening, which was still cutting it pretty close. As soon as the doors opened, I walked inside at around 10 am. I grabbed an audio tour thinking the displays would all be in German with little to no English. I was wrong, but the audio tour helped. Each floor had something different about Maritime history. Started with the early explorers and even included James Cook with his three voyages. I found one floor about ship building and how it changed from wood to iron as technology changed. Early fleets included battles between the French and the English and even the Ottoman empire who at one point in time were powerful. There was even a little bit about pirates. Modern warfare was mentioned including displays on the various ships including an early torpedo. The last floor held the miniatures, which are the flat bottomed models you used to or even still see around that you can paint yourself. One man had donated his entire collection to the museum and had pointed out that if his mother hadn’t bought him one model then he would not have been interested. I had seen pictures online of them, but I was not expecting so many in person. It was impressive. Better than the Columbus ship made from gold that was on the floor below. They did have ships made out of bone and I think you can guess what sort of bone. I think some from tusks and others from whale. I will come back on another trip and see some of the bits that I did miss especially as I was wanting to see all the miniatures. I never realised there would be so much involved asnd the fact you could just about include all countries and many companies too. One floor was about the navy and some of their ships including some British and even included the Bismarck. The next floor was then about the uniforms including the different hats the navy had worn through time. By the time I walked out of the museum it was around 2pmish. I had lunch before I moved on.

The next museum, I was heading to was the prototype museum. I have no idea really what it is about other than cars. I headed to a nearby public loo and found that was closed on Mondays. The museum was also closed on Monday. There was a back up museum thing I wanted to see and that was the miniature wonderland museum that was nearby. I had that as my backup plan or I could have seen that the next day. I wasn’t expecting it to be anything huge at all until I had to wait for an estimated 15 mins before being let in. That was because of the crowds who were already in there. It was less that 5 mins wait. I could have gone into the Hamburg Dungeon, but I think that would have made me bored. The miniatures really were not what I was expecting at all. I was expecting to see one or two trains going around a miniature world, but actual places that had trains going through and plenty of hidden featuresa or easter eggs if you seen them. There was a working airport where the planes landed and took off after taxiing through to the airport and arriving at a gate.. Another had working vehicles that went o an accident of some sort and when trucks entered a tunnel the lights would turn on. At one stage I was trying to find a UFO that was meant to be somewhere and when the room went dark, which was night and to show all the lights turn on, the UFO appeared. It was above my head all along. I did make some videos of a few things. The place was crowded with people who were looking around and were in awe like me of the whole setup..

I knew it was time to leave and I went downstairs and sat down for 10 or so minutes before jumpi9ng up and going for a wander. The pavers on the road do catch you out at times. Not sure if you could call them cobble stone, but they do jump out if you are not paying attention. I was wondering what a spicy museum was, but by the time I got near to it, the museum was closed. I decided now was to see the town hall or Rathaus. Along the way I came to that big church I seen that I did not look at properly. The name for it was St. Nikolai Memorial and it had been a church that was bombed during world war 2 by the allies. It wasnt rebuilt, but left as a memorial to war and basically an anti war memorial. There is a museum for this place as well, but it was actually closing by the time I arrived. I found the town hall not far off and it wasn’t anything like Frankfurt, but it was still impressive. Nearby I did find a World War One monument that was very simple in design. I was going to take a ride on the train back, but ended up walking as I wanted to see what there was to see. I found a Lego shop that had expensive things there that I couldn’t buy. I already bought stuff when I was out on my wander. I ended up spending most of my day out and about. I think my blisters are on the mend as I think the whole problem is my laces are too tight. A loose enough boot feels better.  I have to learn to keep my eyes where I am stepping as some parts of the paths are not even, although some of the sights on the buildings are interesting.

Tangaroa G33K
I love following my family history to see where the trail leads me and is enhanced by the study that I do at university of a Bachelor degree in history. My area of study is New Zealand as that is where most of my family begins. I work in retail and also volunteer with the local marine rescue organisation aw boat crew and have been there nearly 15 years. I do like to travel, although I have spent more time exploring New Zealand than any other country. Brad